As part of its Fifteenth Anniversary Celebration, this Order of Chivalry held the largest class in its history to date with nine Postulants elevated to the Rank and Dignity of Knight. Attending the three-day event were 55 Knights and guests. The Celebration was held in Greeley, Colorado, a university town located 55 miles directly East of Denver, Colorado and the location of the Grand Magistry.

The Vigil Ceremony
Friday, June 20, 1997 at 9:00 PMIn ancient times, the one to be made Knight spent an entire evening in the Chapel of his Lord, often alone, and always in prayer and contemplation. This practice is continued in The Religious and Military Order of Knights of the Holy Sepulchre of Jerusalem.At the Vigil Ceremony, the ancient rites of purification (hand washing), penance, and pardon are performed, and prayers are offered on behalf of the Postulant. The Postulant also venerates the Cross by bowing. Then, the Vow of Silence is imposed and then sealed by pressing the handle of the Sword upon the lips, and the person is dismissed to the Vigil. At the Dismissal, the person is no longer a "Postulant," but a "Vigilant" of the Order.

The Vigilant continues the Vigil by reading and meditating according to his or her particular Church tradition. Fasting is optional. The Vigilant will not speak a word (except for dire emergency) until the Investiture the next morning, at which time the Vigilant will be released from the Vow of Silence.

It should be noted that both men and women are received equally into this Order of Chivalry, the Dames holding equal rights and privileges with the Chevaliers, including access to the various Offices at all levels.

These photographs follow a Knight, from Postulancy, through Vigilancy, to the Imposition of the Hand which grants Holy Sepulchre Knighthood.
Benediction of the Most Blessed Sacrament
In Honor of the Order's Fifteenth Anniversary 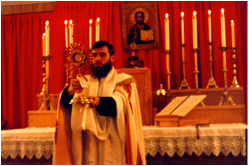 Shown celebrating Benediction of the Most Blessed Sacrament in honor of the 1997 Fifteenth Anniversary of The Religious and Military Order of Knights of the Holy Sepulchre of Jerusalem is a Priest and Knight of the Holy Sepulchre. This Sacred Service is only one of many different activities planned during the anniversary year to honor the Order. The anniversary celebrations culminate in the Fifteenth Annual General Assembly and Investiture held in June 1997 in Greeley, Colorado. In the past, Investitures have been held in these states: