Home and Family
Duke Lloyd Douglas Worley, Ph.D. (Southern Illinois University, 1979) was born in 1946 in Lafayette, Louisiana (U.S.A.). He is married to the former Maydean Mouton; the royal couple recently celebrated their 50th wedding anniversary. The royal Family consists of the Prince, the Princess, and Baron Albert and Baroness Erin, now both adults.

Professional
The Prince has taught both high school and university classes and has won many awards for teaching and scholarship, including the Outstanding Secondary School Teacher award (1974), as well as awards for public service.

The Duke entered higher education as a university professor in 1979 and has been on the faculty of three Universities: Southern Illinois University at Carbondale, The Pennsylvania State University, and The University of Northern Colorado from which he now is Professor Emeritus of English, having retired from the University in May of 2015. During his career at UNCO, the Prince served as Chair of the Department of English and as Director of Composition. At the University of Northern Colorado, the Duke won numerous awards for teaching (Arts and Sciences Professor of the Year) and scholarship (Arts and Sciences Distinguished Scholar), as well as several Professor of the Year awards from many different student organizations.

Prof. Worley is internationally known as a founder of "Neo-Gothicism," the field of contemporary literarature which follows the traditions of the 18th century Gothic novel. Prof. Worley was for many years the editor of the quarterly scholarly publication "The Ruthven Literary Bulletin." Prof. Worley also served as technical editor for "The Poe Newsletter" (1980-1986). He was for ten years the Head of the American Literature Division of the IAFA, a distinguished scholarly association whose annual conference draws hundreds of professors from throughout the world to hear papers on literature. Prof. Worley was for many years a Director on the Board of Directors of Sigma Tau Delta, The International English Honor Society and served as Regent for the High Plains Regency of Sigma Tau Delta. The Prince has published in the fields of computer literacy, Gothic studies, neo-Gothic studies, and Modern British and Irish literature, as well as in the fields of chivalry and in 18th century French philosophy. His most recent contribution will appear in The Encyclopedia of Literature and the Bible, published by Oxford University Press.

While continuing to publish in his typological literary interests, Prof. Worley has achieved a national reputation in the application of microcomputer technology in the humanities. He has presented several papers on the topic at international conferences, has been a regular reviewer of software for computer magazines and publishers, and has conducted numerous microcomputer seminars for teachers in the humanities. In the field of microcomputers in the humanities, Prof. Worley's research very early established the impact that word processing has had and is having on the teaching and learning of composition in both regular and developmental writing classes. As the field of electronic communication continued to develop, Prof. Worley incorporated these advances into his teaching (Facebook, Twitter, the iPad, electronic textbooks, and many others).


Acknowledged as an authority on the history and use of noble and royal titles, Prince Lloyd has for many years been a leader in the field of modern chivalry and knighthood, and he has been several times decorated as a Knight in distinguished Orders of Knighthood.

When His Holiness Pope Shenouda of The Coptic Orthodox Church visited Denver, Colorado, Duke Lloyd Douglas was invited by the Coptic Pope to a private lunch and audience (to read an excerpt from the Prince's journal for that day, click HERE); later that day, following the celebration of the Divine Liturgy, Pope Shenouda presented to Duke Lloyd Douglas the Papal Visitation Medal of Honor. His Holiness also invited the Duke and the Knights of the Holy Sepulchre to visit him at his palace in Alexandria, Egypt. 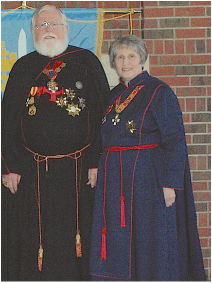